“Learning To Take Life One Step At A Time” 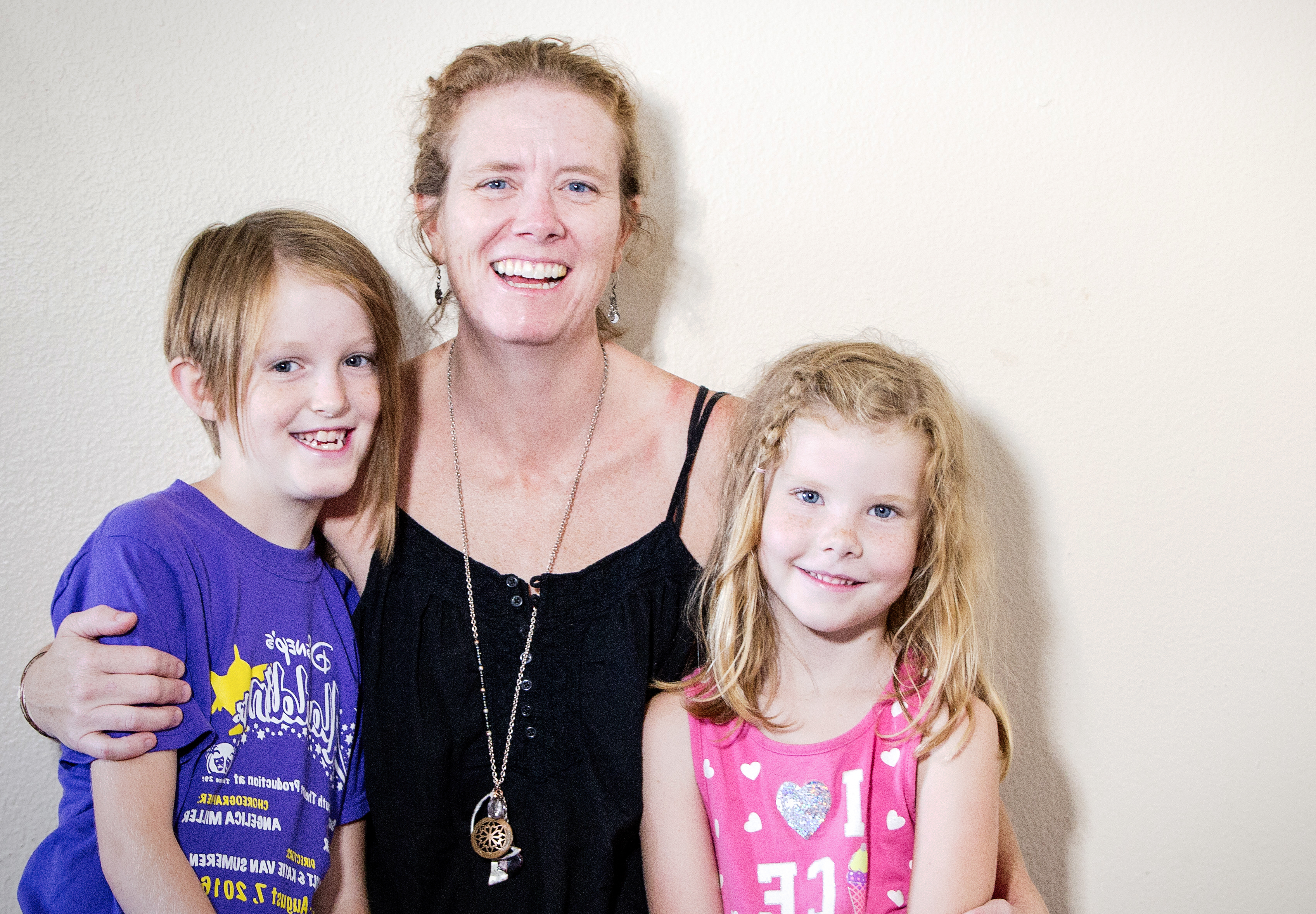 It is a Monday afternoon at Salt Lake City Mission and Dixie Ewing is waiting in line in the church’s common room for a free box of food.

A single, working mother of four children, Ewing has only $2 to her name and a few cans of corn and green beans at home in her cupboard.

Reverend Joe Vazquez, co-director of the Mission, says that the ministry provided goods and services to more than 54,000 people last year. Of those, at least 85 percent were considered the working poor.

“We’re known for helping the homeless,” Vazquez says. “But the biggest percentage of people we help are struggling in poverty and are on the verge of homelessness.”

Statistics show that the odds of getting out of poverty are stacked against women in situations like Ewing’s and that, in fact, single mothers with children constitute one of the fastest growing segment of this country’s homeless population, according to Homeless women in the United States- Wikipedia.

“Dixie is the model of the one going against the statistics,” Vazquez says. “When I see a woman like Dixie Ewing I see a woman who can move beyond all the things that say ‘Suppression.’ ”

Ewing, the mother of children ages 6, 9, 14 and 18, says the greatest battle for her family’s financial solvency occurs in her own mind.

She is continually hounded by fearful thoughts. For example, there is the often the thought: What if my car breaks down and I’m not going to have the money to fix it. Or: What if I can’t pay the mortgage payment this month? More than half of families in poverty are struggling with issues similar to Dixie’s. When she believes such thoughts, Ewing envisions herself joining the ranks of the homeless population. When she is able to turn her attention to God, she finds safety and peace.

“So every night before I go to sleep I pray and I give God all my worries,” Ewing says. “I work really hard not to be worried about money all the time. It is my greatest spiritual challenge right now.”

A 43-year-old massage therapist with her own private practice, Mindful Massage Mom in North Salt Lake City, Ewing notices that everything boils down to the choice between two paths: The one darkened by fear. Or the one lit by hope.

Four months ago, Ewing left her husband in California and moved her children and her massage business to Utah, where she was raised.
Knowing that the mortgage and monthly lot payment for a mobile home were cheaper than most apartment rentals, Ewing bought a used mobile home in North Salt Lake City. She couldn’t afford a formal inspection of the structure so she tried the best she could to inspect the building herself and signed an “as is” contract to buy the home.

Within two days of moving in, she realized that the toilets were barely flushing and the bathtub was slow to drain. Ewing tried the best she could to fix the problems with a plunger and then an auger. Neither helped.
It was the middle of the month. With barely enough money to pay for the rest of the month’s necessities, Ewing could not afford to pay the $500 repair bill that plumbers were quoting her.

She knew she had a choice. She could allow herself to fall into an emotional tailspin, or she could ask God for help.

A few days later, the toilets wouldn’t flush even a little and the bathtubs wouldn’t drain at all.

“I stopped, I turned to God, and I continued to pray.”

At a stoplight in the middle of North Salt Lake, Ewing closed her eyes and felt a sense of peace that transcended her circumstances. In that moment, the idea came to her to call the previous owner of the house, who finances Ewing’s mortgage. What he said surprised Ewing to the point of tears.

“He said, ‘This is probably a pre-existing problem. You don’t need to pay me the house payment for the upcoming month.’”

Ewing knew that God was taking care of her through the owner of the home.
“It was as if God was just picking me up and saying, ‘It’s O.K., it’s alright.’ ”
Ewing paid a plumber, took care of her bills and fed her children.

LISTENING TO THE VOICE FOR GOD

Summer started off well financially, Ewing says. Her new clients began to turn into repeat clients. She paid her bills with ease. Then July came and business suddenly slowed.

Ewing did everything she could to promote her massage business. She did chair massages at a local grocery store. She worked on her website (www.mindfulmassagemom.weebly.com) Then she started working six instead of five days a week. Nothing she did seemed to have any effect on her finances.
“I knew I had to quiet my mind,” she says, “and listen to the Spirit because that is how I feel peace. That is the place where I can make my best decisions.”

Ewing took deep breaths, practiced being grateful for what she did have, and leaned on the memory of her plumbing miracle. These practices, along with something called The Work– a form of self-inquiry founded by American speaker and author Byron Katie – took Ewing through some rather dicey financial moments.

The Work consists of four simple questions: Is it True? Can you absolutely know it’s true? How do you react when you believe that thought? And then, lastly: Who would you be without that thought?

God brought her The Work, Ewing believes, to use as a kind of meditation. “I can hear The Voice for God speak to my heart when I do The Work,” she says.

She remembers one moment in late July, when she was driving from California to Utah to bring her oldest daughter home from a missionary trip. Ewing had $40 and an almost empty gas tank. She was in the restroom of a fast food restaurant in St. George, UT., on the verge of tears, when she asked herself the first question in The Work: “Is it True that I don’t have enough gas to get home?”

The terrifying thoughts in Ewing’s mind stopped. Maybe, she thought, it might not be true. Then she asked herself the second question: Can I absolutely know that I don’t have enough gas to get home?

“And I pondered and prayed. And I sat on the toilet, closed my eyes, took a deep breath, and asked: ‘God, is this absolutely true?’ And I heard the answer: ‘No.’”

In that moment, Ewing relaxed.

“I decided to enjoy the trip. I decided to trust God. I knew that whatever happened, was exactly what was supposed to happen.”
If she could stay in the present moment with her Heavenly Father, she realized, she knew she would be able to stay calm enough to listen to Him guide her.

Ewing made it home without further incident.

ONE STEP AT A TIME

Today, on a Monday afternoon in late Summer, Ewing walks out of the pantry at Salt Lake City Mission, an enormous box of food in her arms.

Suddenly, she has fresh vegetables and fruit, and more meat than she has had in long time. She even has a huge, strawberry cream-filled parfait, which she knows her children will love.

Trusting in God has become a way of life for Ewing. His answers to her prayers assure her that she is loved and worthy of His care, she says. She can see and feel that love right now, in the kind and respectful way the Spirit is working through the volunteers at the Mission.

“The fear of feeling lesser than for needing to come in and ask for help has completely disappeared,” Ewing says.

God promises to take care of us, Reverend Vazquez points out to a reporter visiting his office. He quotes Matthew 6:31-33: “Therefore do not worry what we shall eat, what we shall drink or what we shall wear…Your Heavenly Father knows you need these things.”

Ewing loads her van with the Mission’s groceries. With $2 to her name, she doesn’t know what will happen next. What she does know is that her trip to the Mission, she says, is another miracle for her.

Ewing is surrounded by dozens of other people who are also picking up much needed food boxes. Each has his or her own story of being part of “the working poor.” Each faces an unknown path, lit by God’s grace.

“I am learning to take life one step at a time,” Ewing says. “And I know God is right here with me.”

We seek to serve the homeless community by providing emergency service and long-term recovery programs.